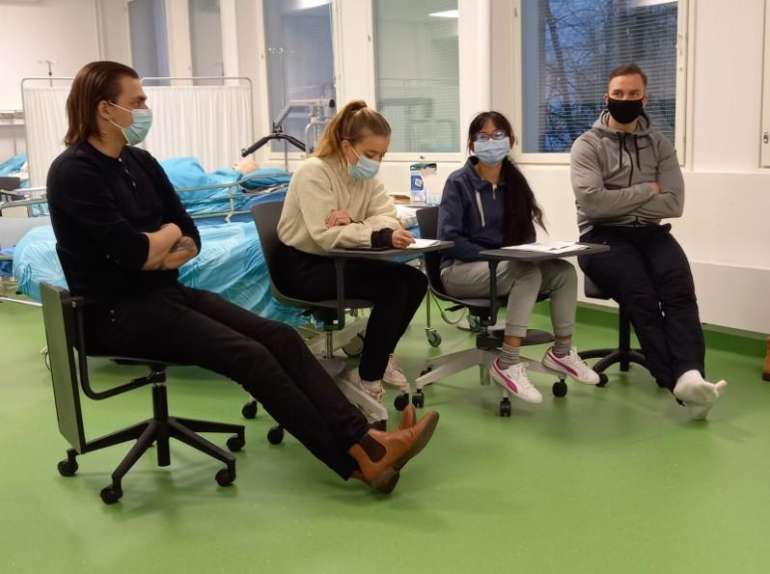 In university healthcare education, simulations can be held in the classroom, in situational environments, or in spaces built specifically for simulation practice. These can involve simulated human actors in a role play.

The main purpose of the simulation was to improve communication between patients, nurses and social workers in order to minimise errors during surgery, prescription, crisis interventions, and general practice. There is now a totally new policy in Diak where students of nursing, interpreting and social work take part in simulations online together online between three campuses.

The simulation involved a patient in Oulu whose daughter was deaf. The nursing students took care of her at the emergency unit in Oulu.  They were contacted the social worker in Helsinki and a deaf support person for the daughter in Turku in the simulation.  This is a very realistic situation in cases where an intoxicated person is being treated in the emergency unit of a hospital.

There were 31 social service students participating in different roles in the simulation. Students were given the role of observing participants and one student had the role of a social worker working in emergency services. The social work students taking part were studying the substance and addiction study unit, which takes place during the third term of their studies.

The simulation scenario contained the idea that social work students learn how to work with an addicted single mother. However, this did not come out very clearly in the simulation, because the nurses did not notice the alcohol problem during the simulation. This can happen also in real life, so this was a very good example of how simulations correspond to real life.

Students were informed about the simulation by e-mail and on the study unit’s Diakle collaborate room. Based on a survey carried out afterwards, most students were pleased with the planning and activation of the simulation case scenario. Students found these are contradictory.

The students were divided into groups of active participants and members of the audience. A total of 75 percent of the social work students were pleased with their own role in the remote simulation.

Almost all the students were pleased with their own learning. A couple of students would have preferred to have more of an active role in this case scenario simulation. During the open question session, social work students focused on some specific learning achievements for them.

Social work students described their own learning with positive ideas

Most of the students’ feedback comments were concerning the simulation contexts: “I learnt about the role of social worker in hospital settings.” “I learned new things such as how multidisciplinary work in this kind of situation works and that this kind of tasks also belongs to my own profession.”

Students commented on their findings thus “I learnt how social workers could co-operate with interpreters.”  “It was a good pedagogical opportunity for facilitating the learning process.” “As a social worker later, I will favour video screens in interpreting situations. A verbal mobile connection is not enough.”

Social work students also discussed the critical points of the simulation and shared opinions about what things need to be developed in future simulations:

“As a social work student, I was in the role of observer. I felt the simulation practice and final feedback as an opportunity to interact with different settings and with diverse actors and students.” “I would have done some things differently. What issues? I would like to make the case a bit more to do with social services. Highlight the need to contact social services and child protection if you think a single mother with no family has alcohol issues.”  And the final comment:

“In my opinion the constructive feedback was missing, not everything went as perfectly as it was said by the teachers.”

Students were really pleased with the group performance in this case simulation.  This simulation supported multiprofessional learning for all the students and lecturers who participated.

We all got a great gift. The result was that we are all now aware of the needs for multiprofessional co-operation between professions. If we are committed to multiprofessional practice, we should develop our curriculums and study units together with different disciplines. As a social work lecturer, I cannot develop my own multiprofessional understanding without my colleagues in nursing and interpreting.

This was also the first time for us teachers in charge to organize an online simulation. We did it this way due to the coronavirus restrictions. This gave us a new, challenging and pleasing own learning experience between three professions.