Sign language and the importance of equal communication – also between professions 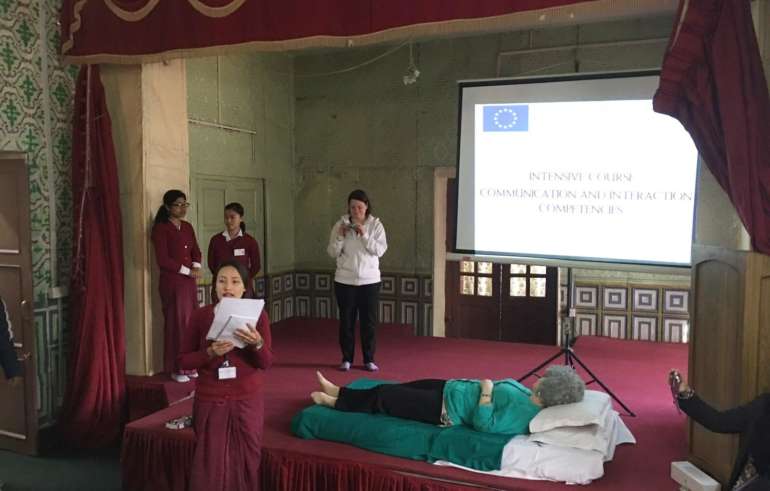 Read how student Aagya Shrestha in Kathmandu, Nepal perceived the experience of attending an intensive course organized by DVINE project. In addition to experiencing a multicultural and -professional setting, an idea of sign language as a feasible communication method was introduced.

Our ability to communicate clearly is often taken for granted. Meanwhile, 360 million people around the globe are suffering from disabling hearing loss. Today, people with a hearing disability are not called “dumb”, because they have their own language. They convey their thoughts and feelings through sign language.

Having participated in this intensive course, I think that knowing sign language will be a major strength or skill if one wants to work with the hearing disabled.

In the case study, a case was presented in which a person had a problem for which we as a multi professional student group were to find a solution. The nurses had to use various methods they learned in the session to establish the patient’s health condition. The microbiologists had to submit different reports about the health condition. The case also included a social problem the patient was experiencing.

After finding a solution, every group had to comprehensively convey their findings or solution for their case in front of everyone. On the other day, we roleplayed the same case. Everyone was assigned to play their respective profession.

In my group, there was an exception: we had a sign language expert and a girl with a hearing disability. I played the role of mediator between the person with the hearing disability and the sign language expert. So, I learned basic sign language for my role. Every roleplay started with nurses performing the patient’s treatment and later contacting social workers to help the patient deal with their social problem, and microbiologists to prepare the patient’s medical report. It was my first roleplay, so I was quite nervous and unsure of things, but the patient’s acting (who was the presenter too) made the whole roleplay so palpable I was compelled to do my best.

In my opinion, the feedback and discussion session was one of the most important parts of the course.

Through this intensive course, I got to know about “multi-professionalism”, which I do not think I knew about before. It was enlightening to observe nurses, social workers, and microbiologists working together to solve a given case. It taught me I could also work as a healthcare social worker in the future.

Meanwhile, in relating this to Nepal, it is almost impossible here to show dependency between professions. So, this was new for us. Doctors, engineers, and lawyers receive deserved hype, but I feel social work lags behind when it comes to recognition as a profession. The other two professions, nursing and microbiology, are considered formal professions, but social workers have no such identity in the professional world.

The multi-professionalism of our roleplay was not limited to the stage – it gave us an idea of the possibilities of three professions (nurses, social workers, and microbiologists) working together in the future. This will have a great impact.

Besides professional learning, skills, and experience, this intensive course has also helped me personally. Having completed this course, I find myself more social and interactive. This may be because I came across so many new people. Furthermore, my confidence level was boosted after I participated in the simulation. This also helped me explore my acting skills, so now I think I can at least act when given small roles.